Chiang Mai Airport is considered one of Thailand’s largest airports, second only to Suvarnabhumi Airport. It serves approximately 2 million passengers yearly and 130 flights weekly despite only one terminal (conjoining two buildings) serving both domestic and international flights.

The airport connects passengers from and to Bangkok, Phuket, and Samui, as well as China, Taiwan, Singapore, Laos, Myanmar, South Korea, and Taiwan. Among the airlines serving the airport are Thai Airways, Bangkok Airways, Singapore Airlines, AirAsia, and Nok Air.

Check-in counters are situated in the center of the ground floor, while arrivals are located at the northern end of the building, and departures, on the mezzanine floor.

Getting To and From the Airport

The airport is approximately 3 kilometers away from the city center and transporting between the two points will take only around 10 to 15 minutes by car.

Passengers can have several options when transporting from and to Chiang Mai Airport such as buses, taxis, and private transfers, among others.

One of the cheapest yet a convenient option is through taking the red song-taews or passenger-carrying trucks which can be easily found anywhere in the city. At the airport, you will need to walk into the main street to flag down one.

There are also called Tuk-tuks, or motorized three-wheelers, which can be tapped for private use if you opt not to share with other passengers. Similar to song-taews, tuk-tuks can be easily located on the main street of the airport.

The taxi terminal is located on the north-end part of the airport. After you have collected your baggage and cleared customs into the reception hall, just turn left until you reach the taxi hub. You can also contact the taxi desk located at the exit points of the conjoined domestic and international buildings. On the other hand, most hotels in the area can arrange private transfers or taxis to the airport for less hassle.

There are 450 parking slots within the airport and rates differ depending on your length of stay.

For a four-wheeled vehicle, the first hour of parking will cost 20 baht, and will increase by 10 baht each for the second and third hour; 100 baht if you reach 12 hours; and 200 baht for 14 hours.

Meanwhile, six-wheel cars are imposed a different rate. The first hour would cost 50 baht, and will increase to 100 baht for the second hour, and 175 for the third hour.

Should you wish to park your car overnight, parking costs 250 baht.

Chiang Mai Flights. Information on Flights to and from Chiang Mai 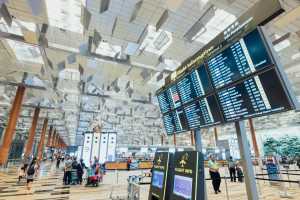